2019 GVTC Annual Meeting is One for the Books

Each year, our Annual Meeting never ceases to amaze us! Held at the New Braunfels Civic Convention Center, GVTC's Annual Meeting gave a round of applause to its new and returning members elected to the Board of Directors, recognized the 2019 President's Award recipient, and announced increases for both Capital Credits and Member Dividends for GVTC members. 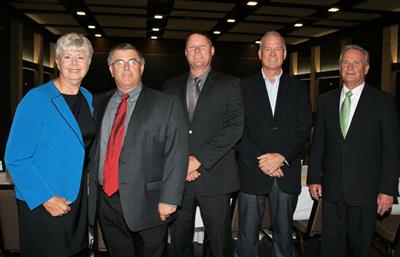 On the ballot this year, five positions on the GVTC Board of Directors were open for election. GVTC members voted via direct mail or online, and the convenience of the process showed with voter participation growing over 60% from the previous year!

GVTC also welcomes its newest member to the Board of Directors, Scott Kramer, who will serve as Director of District III, Position 4 and replace longtime board member, J.B. Lester, who retired after faithfully serving on the GVTC Board of Directors since 1961.

GVTC also recognized its 2019 President's Award. This honor is awarded annually to an employee or teams of employees who have made the most outstanding innovations or improvements at GVTC. The 2019 recipient, Financial Analyst Mike Ferriera, demonstrated superior expertise amidst the development of GVTC's Member Dividend Program. He developed the financial model that allowed GVTC to predict how much would be paid out in dividends. His forecast was so precise that it was 99.9% accurate on a total member dividend payout of $9.7 million in 2018. This is particularly impressive as the Member Dividend Program was the first of its kind in the industry, and Mike had no historical data to assist in his analysis. Mike's innovation, dedication, teamwork and unrelenting pursuit of excellence have set a new standard at GVTC.

Overall, the GVTC 2019 Annual Meeting brought exciting news for what's to come for GVTC and its members. GVTC's mission is to ensure the long-term viability of the company by providing the best value in communication services and enhancing the quality of life in their communities. The Board of Directors, management team, and over 200 employees continue their commitment to fulfill this mission every day.