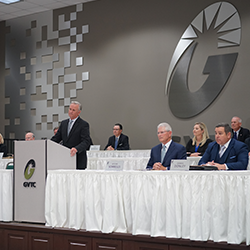 GVTC Communications decided to hold the 2021 Annual Meeting virtually for the safety of customers and team members. This year, GVTC continued its tradition of welcoming newly elected and returning members to its board of directors and announcing an increase in Capital Credits for GVTC members by live-streaming the meeting to their members.

Give a Warm Welcome

Four of the five elected members to our GVTC Board of Directors included incumbents who’ve served us well, and we see great potential for our company in these years to follow. Positions are three-year terms and are as follows:

Congratulations to the elected GVTC Board of Directors!

This month, GVTC distributed its largest Capital Credits in the history of the company totaling $7.5 million, an increase from its 2019 issuance of $7.25 million. Led by the GVTC Board of Directors, GVTC has released more than $57 million over the last decade. GVTC’s CEO & President, Ritchie Sorrells says, "GVTC's ability to issue annual Capital Credits this size is a testament to the hard work of our dedicated employees and the visionary leadership of our Board of Directors.”

Looking to the Future

It was an Annual Meeting to remember, and we are continually blown away by the participation and eagerness of all our employees and customers to represent GVTC well.

GVTC is optimistic about the future of the communities it serves. GVTC’s mission is to ensure the long-term viability of the company by providing the best value in communication services and enhancing the quality of life overall, and its board of directors, leadership team, and 220+ employees continue to fulfill this mission daily.