This year, GVTC Communications made history by holding
the company’s first-ever Hybrid Annual Meeting. The 67th annual meeting of the cooperative was held in person at the New Braunfels Civic Center while also being live-streamed virtually. 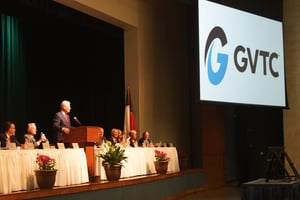 GVTC continued its tradition of welcoming newly elected and returning members to its Board of Directors and announcing an increase in Capital Credits for GVTC members. This month, GVTC distributed its largest Capital Credits in the history of the company totaling $7.75 million, an increase from 2021’s issuance of $7.5 million.

Since the cooperative’s creation, the Board of Directors has helped secure long-term viability for GVTC in an ever-changing industry. The GVTC Board consists of 15 directors who are GVTC members, and each serves on behalf of the designated GVTC district they reside in. We rely on their leadership and specialized skills to set GVTC apart and ahead of other providers.

Four of the five elected members to our 2022 GVTC Board of Directors included incumbents.

Congratulations to the elected GVTC Board of Directors!

It was an Annual Meeting to remember, and we are continually amazed and proud of our employees and customers' participation in representing this premier telecommunications cooperative.

GVTC’s mission is to ensure the long-term viability of the company by providing the best value in communication services and enhancing the quality of life overall. Its Board of Directors, leadership team, and dedicated employees continue to fulfill this mission daily.