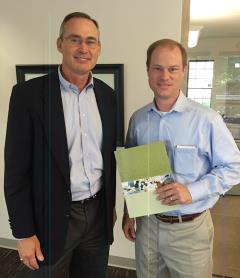 Robert recently went to Austin to advocate for continued support of the Texas Universal Service funding to ensure rural Texans are not forced to depend strictly upon wireless or satellite services for broadband connections.

Representative Cyrier was elected in 2014 to serve District 17, which covers most of GVTC’s service area around Gonzales and Waelder.