Show love for your favorite team, get ready for March Madness!

The most exciting time in college basketball is right around the corner! March Madness is only a few weeks away! It is time to start bringing out your college gear and planning your watch parties. See below for the schedule, and make sure you have access to cheer on your favorite team with your TV package. 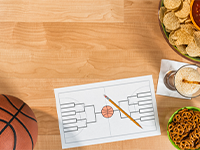 When does March Madness start?

The Madness officially begins on March 13th, 2022, with Selection Sunday. Then, things pick up quickly soon after.

GVTC Channels that will broadcast the games:

Tiers/packages customers need in order to see the games:

Trust us when we say you don’t want to miss any of March Madness! And with GVTC TV packages, you'll never miss a game.

Your guide to March Madness 2020

Spurs fans - pull out your jerseys and get ready because we are about to turn your sports dreams...
Read More

Get Summer Ready with Fitness Gaming

Summer’s on its way and whether your summer plans involve lots of time by the pool, beach or lake,...
Read More